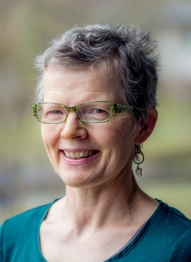 Julia Shaida has practiced yoga for twenty-five years and has taught since 2002. Certified at the Introductory II level in the Iyengar method, Julia has taught at her own studio, at Yogaworks in Irvington, New York, and at the Iyengar Yoga Institute of New York, where she also conducted a weekly study group in yoga philosophy. She served on the Board of Directors of the Iyengar Yoga Association of Greater New York. Julia has long loved language and reading. She attended Bennington College and there earned her undergraduate degree in Literature and Ancient Greek. She has studied Sanskrit with Vyaas Houston of the American Sanskrit Institute and with Bharati Devi and Prof. Ram Karan Sharma at the Ananda Ashram in Monroe, NY. Julia lives in Bozeman, Montana.